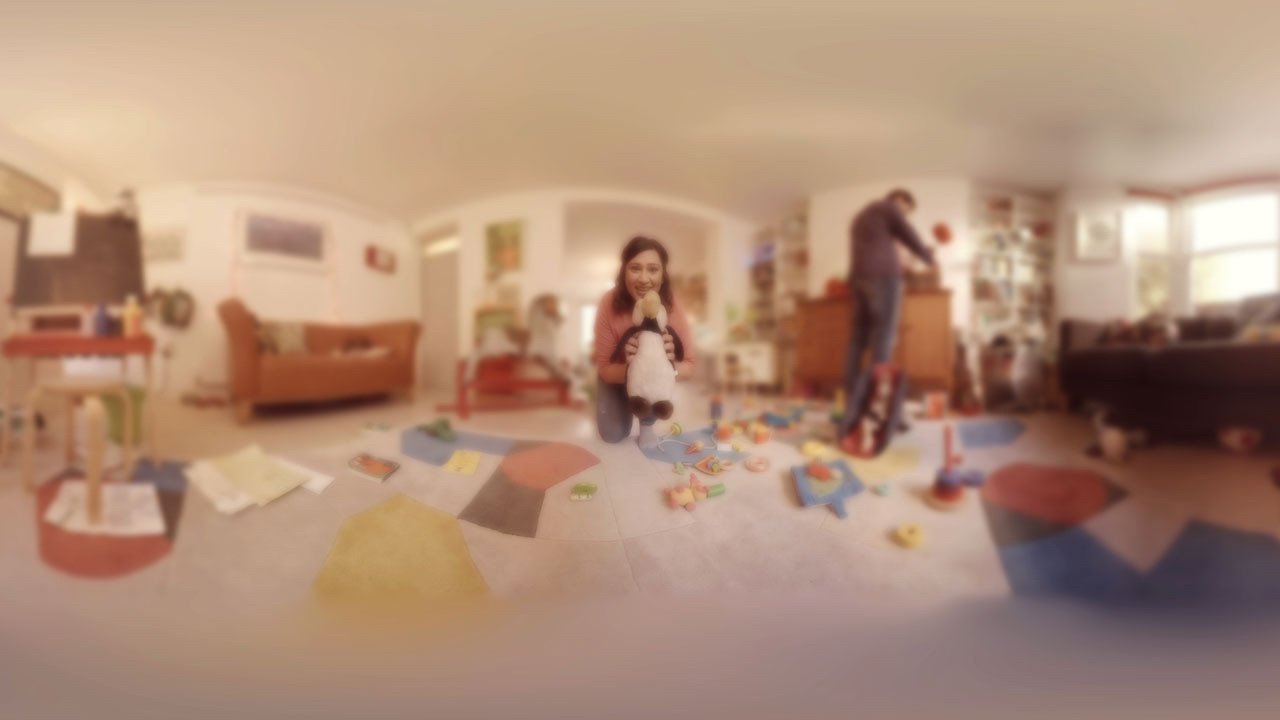 The Mill continues to work closely with the Guardian’s VR team, helping to develop this latest experience exploring the ‘First Impressions’ of the world through the eyes of a new born child.

Share
Read MoreRead Less
Using the latest research in neural development and colour vision in infants, the film allows the user to experience and interact with the world from the point of view of a baby during the first year of its life. It's a period that none of us remember, but is the most crucial stage of our journey to adulthood.

Drawing on the latest academic research, viewers can relive the dramatic visual development that happens over this time. At first only muted colours are visible, then as the experience unfolds the world is coloured in - first reds and greens, then yellows and blues. Depth of focus increases, slowly the room becomes 3D and the child’s parents, other children, objects and even the family dog come into focus.

The Mill team played a pivotal role in the visual development of the piece and were also present on shoot, paying particular attention to the depth and scale of the scene in which the experience plays out.

Taking a very ‘hands on’ approach, Mill Creative Director Adam Grint starred as the father in the film with Mill Producer Jarrad Vladich contributing as dog handler with his housemates’ pet Hayes.

The Mill’s 2D team refined the final look of the experience using Nuke’s CaraVR toolset. This enabled them to explore uses of depth passes and stereoscopy to greater enhance the storyline and the unique perspective of a child.

The Mill’s Product Development team, led by Kevin Young also crafted the interactive elements to the piece via triggered sounds using the Google Daydream controller. A bespoke looping sequence to the piece also allows for further interaction whilst viewing the experience.

Mill Creative Director Adam Grint explains, ‘It was a pleasure to be working alongside the Guardian again, this time with the added bonus of a spot of acting! ‘First Impressions’ reiterates a universal truth about all good VR experiences - it’s not about the tech, it’s all about power of the narrative.

All the visual development we did at The Mill was in support of that, from creating a disorientating sense at the outset to mirror the development of a baby’s sensitivity to colour and, finally, that emotional connection as you stare into the eyes of your mother.

Two-thirds of the people who trialed the experience early on in the development, came out of the experience in tears, so we knew we were involved in something special.  Credit goes to the Guardian for their rigorous attention to accuracy and for putting the story first.  It was one of those projects where everyone mucked in to bring something extra to the piece and the hard work paid off.'

The piece is available for download now on Google Daydream.