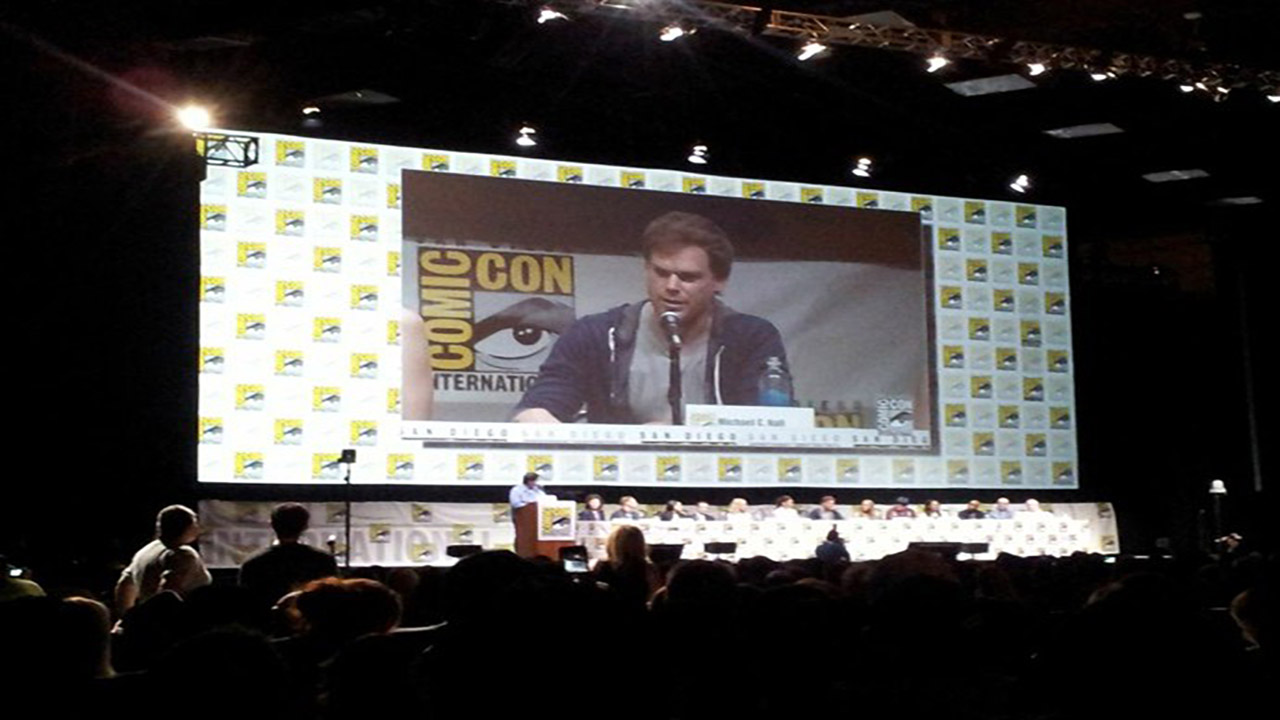 The Internet is still reeling with news, reveals, secrets and celeb spots from last weeks San Diego Comic Con. R&D Engineer Claudia Zimmer guest-blogs her Comic Con diary… the highs, the lows, the shocks and the queues. Thanks also to 3D Artist Yorie Kumalasari for some of these fantastic photographs. Yorie voted her top celebrity spots as Tom Hiddleston, Loki from Avengers, and the cast of the show Under the Dome which included Dean Norris aka Hank from Breaking Bad.

The first session of the day Sherlock, which had Steven Moffat and Mark Gatiss attending as well as some of the producers, but no actors. It was certainly entertaining, but not the highlight I'd hoped for. Next up was The X-Files which had a bunch of writers and producers and the main actors (Gillian Anderson and David Duchovny) plus the creator Chris Carter there. They were appearing in celebration of the 20th anniversary of the show, but unfortunately they didn't actually look or sound too enthusiastic about it! The Dexter panel had the majority of the cast there, with some writers and producers. Since it's their last season they were fairly nostalgic and seemed to absolutely love what they are working on. It was a really engaging session.

Awful day! People were in line from 3am onwards. Everyone who arrived after 7am basically didn't get into the panel rooms! I took a panorama picture of the line and I'm sure that wasn't the longest it was that day. People were queuing mainly for The Walking Dead and Game of Thrones. I didn't actually hear such good things about those panels though. They seem to have been entertaining, but perhaps not worth a 4+ hour queue… A highlight that day had to be Sony Pictures launching the latest Spiderman movie. Andrew Garfield was on stage for 10 minutes playing Spiderman and interacting with the audience. The audience actually gave them a really hard time with their questions, but they dealt with it really well.

My personal highlight was going to the Shield panel where they actually showed the full first episode! That was pretty cool. It looked really good, it was created by, and the pilot at least, directed by Joss Whedon. Doctor Who's Mickey (Noel Clarke) has a role in it as well. Later on that day there was a full Joss Whedon panel (which was quite empty really, and basically just a casual question-answer thing) that was a lot of fun. It felt way less forced than the bigger panels, just because there wasn't any schedule really, it was just about what the people were interested in. An exclusive nugget of information is that he's tired of adapting other peoples characters and universes, and wants to do something new and of his own again. So… the lines did not get shorter. The Warner Bros. and Legendary Pictures, then The Hunger Games, 20th Century Fox and Marvel Studio panels were some of the highlights. I didn't see the Warner Brothers one but all the chat was about the teaser for a Superman+Batman crossover movie which will be interesting. The teaser was basically the logos blending into each other, so I have no idea what story they might take for that! The Marvel Studio panel was a combination of Thor and Captain America. Unfortunately Thor only got 10 minutes airtime, the rest was cast and crew of Captain America. However, those 10 minutes were amazing! They showed the trailer, then switched off the lights and Loki (Tom Hiddleston) appeared with lightning effects on stage, in costume, basically recruiting the audience. He had a hard time keeping a straight face, but it was a great appearance. The 20th Century Fox panel was mainly centered around X-men Days of Future Past where they had an amazing selection of cast, from Hugh Jackman, Patrick Stewart, Ian McKellen, and so many more from the X-men and First Class movies; it was pretty incredible to witness. Karen Gillan (Amy Pond) will be playing Nebula and dramatically revealed her shaved her head for the role. Supernatural, Breaking Bad and Doctor Who 50th anniversary panels were definitely the main attractions. But… I have no idea if they were any good, since the lines didn't get any shorter from panel to panel. That day, I have to admit, I was totally wiped out so I we went to the Sony and Nintendo area and played video games most of the time. Finally, some relaxing! Thanks Claudia for being my roving Comic Com. It sounds like the queuing patience paid off… just!
Save Playlist
My Mill Playlist (0)
Save Playlist
Clear
copy link
integer varius
Lorem ipsum dolor
Press Enter to Search