The Mill in NY and Chelsea Pictures hosted "A Conversation with Alex Gibney", the award winning filmmaker behind a host of thought-provoking documentaries on topics like corporate greed (Enron: The Smartest Guys in the Room, 2005), torture (Taxi to the Dark Side, 2007), the Catholic church (Mea Maxima Culpa, 2012), whistleblowers (We Steal Secrets, 2013) and most recently, Scientology (Going Clear, 2015).

Brian DiLorenzo, co-founder and CEO at MING Utility and Entertainment Group, interviewed the filmmaker, delving into Gibney’s career, creative process and experience making some of his most memorable – and revealing – films.

Known for a documentary-style that blends nonfiction subjects and themes with fiction-influenced storytelling techniques, the filmmaker provided some great insights and lessons-learned from his experiences.

While Gibney’s IMDb page includes a large and impressive collection of directing, producing and writing credits, the filmmaker actually began his career in the editing room. After working on fiction films like 1970’s sci-fi flicks Shock Waves and Invasion of the Bee Girls, he transitioned into a nonfiction editor where he quickly learned that, “While it’s very hard to fix a fiction film in the editing room, documentary films are MADE in the editing room.” These experiences motivated him to go out and raise money to make his own documentaries.

After moving from LA to NY, Gibney had the opportunity to produce Martin Scorcese’s project The Blues (2003), a series of films by seven prominent directors exploring the evolution of the music genre. Through the experience working with directors like Scorcese, Mike Figgis and Clint Eastwood, he discovered a richer storytelling approach to nonfiction films, “It was inspiring because they brought to their work a sense of authorship and cinematic vision that comes from being a fiction film director. At the same time, they brought a tremendous amount of respect to the contradictions of everyday life, the texture of going out and finding unpredictable material in the field. That combination was irresistible to me.”

If success can be defined by Oscar nomination, Enron: The Smartest Guys in the Room (2005) is the project where Gibney’s voice as a prominent filmmaker was realized.

After reading The Smartest Guys in the Room: The Amazing Rise and Scandalous Fall of Enronby Bethany McClain, Gibney realized the business scandal would make a great story because of the “fantastic characters full of hubris, outrage and humor, and economic fundamentalism that verged on sadism.” He was encouraged to send his idea to Mark Cuban in a very short email, ultimately secured funding for the film.

Influenced by his previous experiences, Gibney took a more playful approach to the film that allowed him to ignore “the rules” of documentary filmmaking. For example, the film featured toe-tapping, upbeat music and recreated a suicide through a “metaphorical archive” approach, representing the emotion of an event instead of its literal representation. Gibney commented, “One of the things I learned on The Blues series is that you can do anything. It seemed so creatively liberating. I took that to heart when I embarked on the Enron project.”

He also extended this approach to his team, hiring cinematographer Maryse Alberti, who has done both fiction and nonfiction films, and Alison Ellwood for her creative and intuitive edit. As a filmmaker that has released at least two full-length film documentaries and a two-part TV series (Sinatra: All or Nothing at All, 2015) this year alone, Gibney obviously knows the value of a strong creative team. He recommends, “Hire really creative people that are smarter than you and everything works out.”

The theme of power, the use of power and the self-deception of people in power, is a theme that can be seen across many of Gibney’s films. While he is often pulled into a project by a theme, Gibney will only pursue a project if there is a strong story to engage audiences, and through that story, investigate the theme.

In the case of Taxi to the Dark Side, the idea of creating a documentary on torture was proposed to him while on a panel promoting Enron. Initially hesitant that there was an audience for the film, Gibney pursued the theme after being encouraged by his father, a former interrogator in World War II.

Gibney’s approach to constructing the story can sometimes be challenging, “We found the story of the Afghan taxi driver and the film [Taxi to the Dark Side] became a sort of a murder mystery. But it was a story that became very hard to tell because it was using the clues in the murder mystery to tell the entire tale of how there was a policy of torture in the Bush administration.”  While the film won an Oscar in 2008 (and many other awards), they still had to work to understand the narrative flaw and find the right structure to make the film work.

Gibney often looks to go deeper into the villain’s perspective and show their humanity and complexity, often revealing that it’s a human problem and we’re all capable of doing bad things if not careful. This can be seen across many of his films including Taxi: “In the heart of the film was the concept of force drift, showing what can happen to human beings when their dark side was unleashed.”

The inclination to sensationalize and simplify an argument can be found across many popular documentarians’ style of filmmaking. Gibney opts for a different approach, pushing stories and lessons that are complex and reverberate, ultimately encouraging viewers to think about the story from all perspectives. He shares, “In the case of Enron, two of my producers were advising me to not put in material that would enhance the humanity of the three main figures [villains] in the story. In the end, the audience is still furious with them but you need it to understand why they do it and how they got to that place.”

The Unruly World of Documentary Filmmaking

Documentary filmmaking can often be filled with surprises and disappointments that may require creative approaches to storytelling or even altering the direction of the narrative. Getting access to previously unattainable content can challenge the filmmaker to figure out how to best incorporate it into the film. In the case of Mea Culpa, Gibney knew of a clip showing the victims confronting their predator but wasn’t sure if they’d have access to the full clip to include. The challenge became “finding a powerful narrative mechanism while also remaining true to the material in a way that retains its best emotional power.”

Not receiving access to key content can either kill a film or more positively, alter the filmmaker’s approach to the subject entirely. For example, Steve Jobs: The Man in the Machine (2015) was sold on the basis that Gibney would have access to certain audiotapes, which he did not end up getting. Without the tapes, he was forced to improvise, “I got interested in the idea that when Steve Jobs died, there were so many people that didn’t know him that were weeping. What was the huge emotional bond they had with this guy? It became sort of a mystery story and I like mysteries. I thought this one would allow me to investigate in a more first person way while also examining our relationship with technology.”

Inspired by the great filmmaker Orson Welles and the structure of Citizen Kane, Gibney altered his approach to the film, making it a “film of discovery.” Beginning with the death, he created an “impressionistic portrait” through commentary from the people whose life Jobs’ touched, both directly and tangentially.

And then there’s the possibility that the film you’re creating is based on a lie that destroys your narrative completely. In the case of The Armstrong Lie (2013), Sony had asked Gibney to tag along for the victory lap of beloved sports hero Lance Armstrong. The original film, a story about an aging man coming to terms with the limits of his power and trying to succeed one last time, was actually completed when the reality of the doping scandal came to light. Things changed dramatically when Armstrong eventually confessed to doping, requiring the filmmaker to go back and look at the footage from a new perspective, ultimately changing the direction of the film entirely.

Wrapping up and Moving on

The search for perfection will always lead to frustration. Gibney recommends finishing a film by going on to make another film. He said, “Sometimes I go back and think ‘that’s a good sequence’ or ‘fuck, what was I thinking?’ but I think you get to a point where you’re running out of money or you know you HAVE to get it finished, and then it’s finished for that moment. That’s why you make another film and then you can follow up with something new and different.” Gibney does screen films before releasing to get people’s reactions and will modify the film until they reach they point where it feels like “this is right.” He sums up the point, “For me, it’s a mix of pragmatism and the feeling we’ve achieved the greater intent.”

A Conversation with Filmmaker Alex Gibney continues in Part 2, featuring great advice for aspiring filmmakers from the audience Q&A. 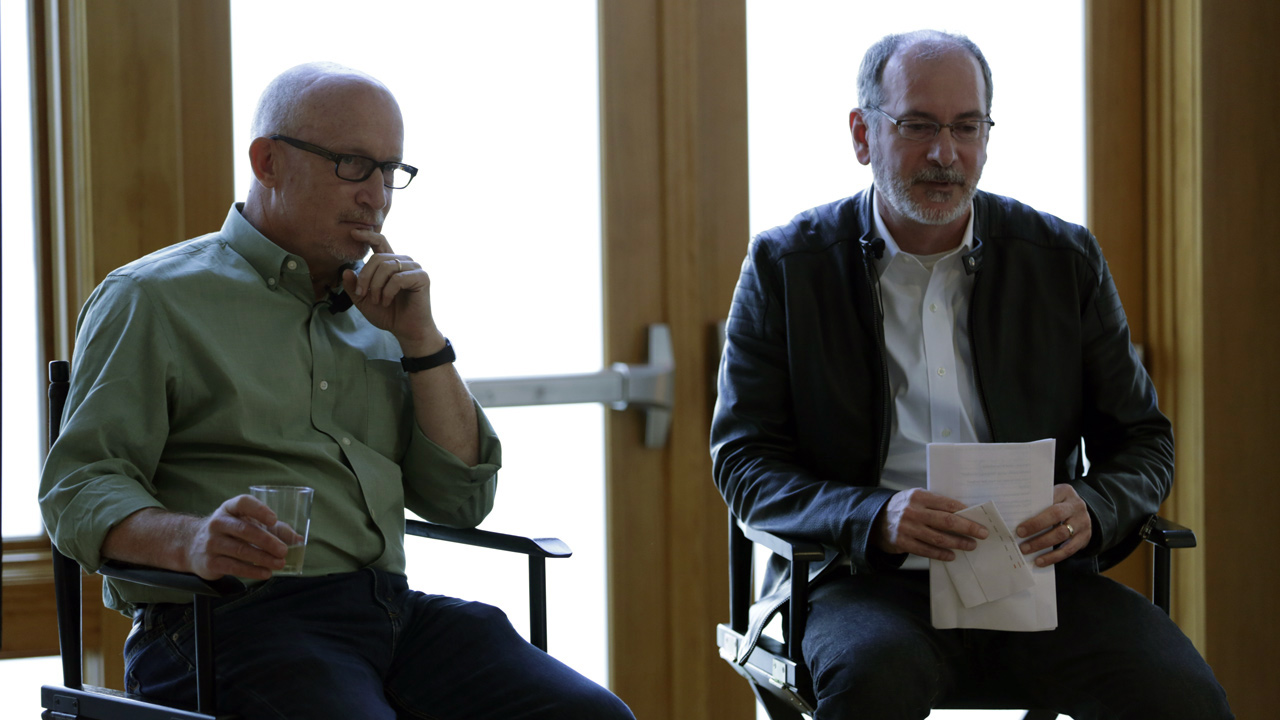