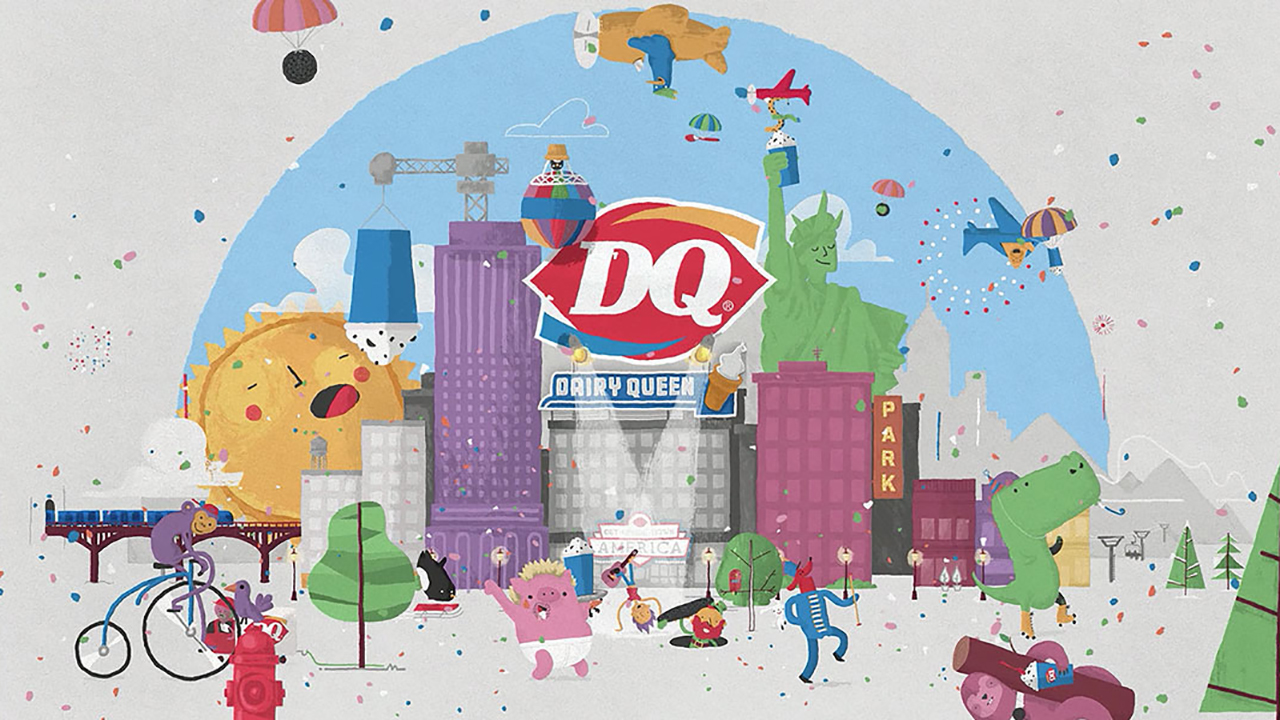 Dairy Queen kicked off the 'Flip a Blizzard' campaign with the spot 'Clap Your Feet America!', inviting fans to #GetUpsideDown with an Oreo Blizzard treat. Barkley US and Mill+ in Chicago collaborated on the fully animated spot celebrating DQ's upside-down philosophy.

Directed by Mill+ designer Matthew Darnall, the team in Chicago designed a whole chorus of weird and wonderful animated characters and a world of topsy-turvy fun for 'Clap Your Feet America!'.
Matthew explains how he and the team created the Blizzard-flipping spot for Dairy Queen below:

Starting with the original sing-along song scripted by Barkley US, the Mill+ team wanted to jump into this world and establish the upside down rules where each character had some harebrained way of fitting into this Oreo studded land.

From the start, we pursued an illustrative style that felt hand crafted and playful. We investigated creating assets in vector, but it lost some of the personality and imperfections that lent to the charm. We also wanted the art generated to match the animation style, so it was a bit of a balance act between art style, rigging, and animation.

Defining The Story A whole minute of fun character animation was really exciting brief for us. We spent a substantial amount of time listening to the custom music track, which was incredibly catchy and fun. To us, it was a roadmap. It had a story of it’s own, but we also had a lot of creative leeway to add and remove to it as we chose. It was very inspiring and exciting.


We used our main character, the troubadour, as the vehicle to hinge the action and storytelling, while also keeping it anchored in the world we’ve established. There should be a sense of movement and progress throughout the piece – like a journey. But things also needed to be upside down! Cutting from the scenes of him dancing with his forest friends to unique moments highlighting the song kept it interesting, and minimally repetitive.

The main rule was very simple: every character is upside down and every character finds a way to make it work for them! After that, the inspiration was a creative, fun, simplistic and organic process. A character had to make us laugh, whether it be in design, absurdity or animation. As long as it was charming, we would make it work.

The troubadour is the main character and the face behind the DQ rallying cry, so we had to do some brainstorming to get him right. We knew from the get-go that we wanted him to be simple and identifiable, but we wanted more personality out of him than you would get in a basic avatar. In a first pass, he had shaggy hair with a cap and round sunglasses. He was fun but started to look like a camp instructor version of John Lennon, which is awesome, but not what we had in mind. We decided to reign him back in while keeping the stubble and sweet shirt.
We were always reaching for new and unexpected ways to animate the characters. One of my favourites is the sun, he has no arms and I love how he desperately tries to get a taste of an Oreo Blizzard just out of reach. It presented so many animation possibilities that we just couldn't resist.

The “orangutan flying a plane” sequence was a particularly fun one. It’s an instance of where we got to collaborate with the script and the song. Finding a way to stitch together a pilot monkey, a brother and sister living the dream (which is living in a massive Blizzard that is held by a furry monster, duh), a trapeze artist, and two feet clapping together - was a riot.
Using the Blizzard as a prop here being passed between the characters gave it the element of interaction that we wanted - and a bit of purpose. That acrobat needed his Snack!

The concept of a gang of four mini construction workers coordinating to flip a massive blizzard made us laugh immediately, so we knew it was worth pursuing. We had a blast animating these little guys' actions.

If you look closely, you can see the grouchy truck driver slam the car as he barks at his brothers and the tall one on the scaffolding celebrates the big flip with a single snap of his suspenders!

There's also the bunny bouncing around on his ears. He's so cute! We kept making cycles for him that amused us, so we kept finding more places to put him.
We tried to find fun and inventive ways to present characters, the environment, and the Blizzard’s upside down! The sloth moment is one that makes us chuckle every time. At first, the orientation is a little confusing  - up until Sloth gives it all away that he is upside down in a tree by saying it out loud. Oh Sloth, you are so literal, and very well dressed!

Towards the end of the film, the song's tempo cuts in half and almost enters ballad territory. We wanted to illustrate something that would match this synth-like moment, and when we landed on a space scene we knew it was perfect.

What better way to emphasize this far out transition than by ripping open a black hole and going into another universe? Everything and everything can be topsy-turvy in space! No rules of gravity apply, so we could play around with the movement. We gave the hero a psychedelic outfit change, some sweet shades and upgraded him to a bad ass axe guitar.
We wanted the final shot to be a visual crescendo, with lots of action and reoccurring characters. It had to feel like we arrived somewhere! If the piece didn’t have a flow and sense of travel, we don’t think it would have had the impact we wanted.
Follow Dairy Queen on Twitter, Facebook and Instagram for updates on the sweet, #GetUpsideDown fun, and take a look at more characters from 'Clap Your Feet America!' below! 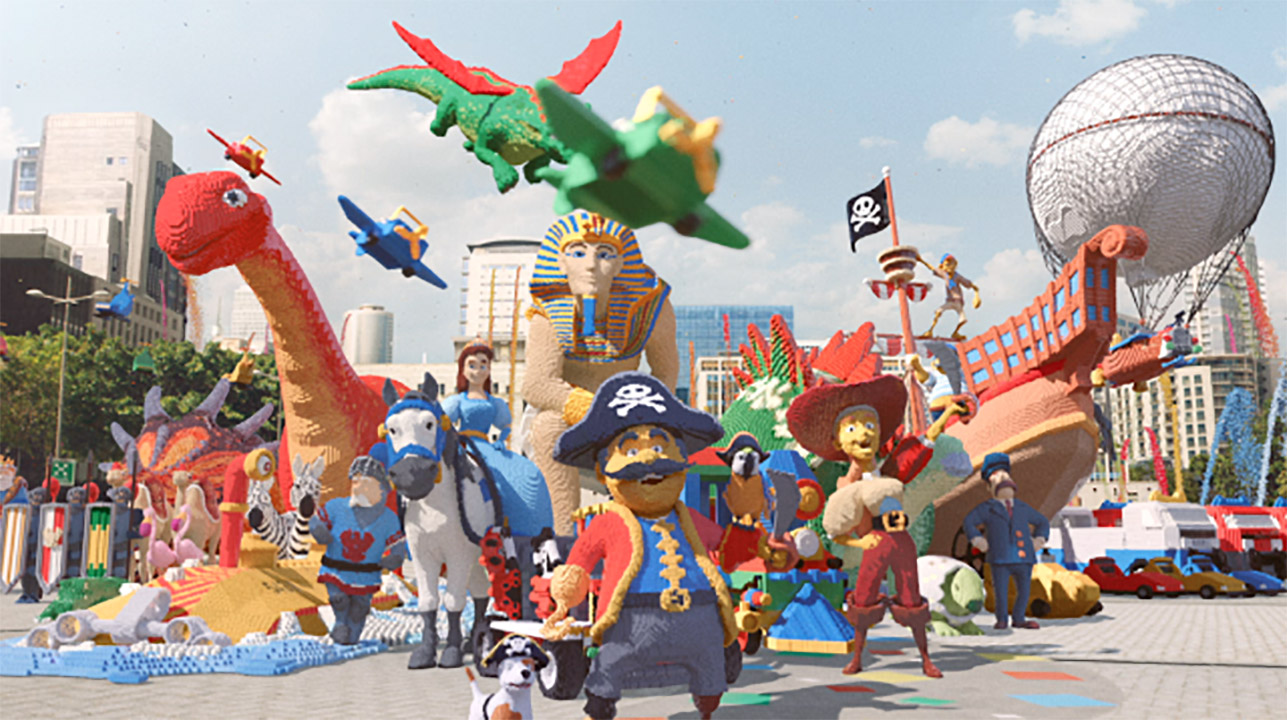 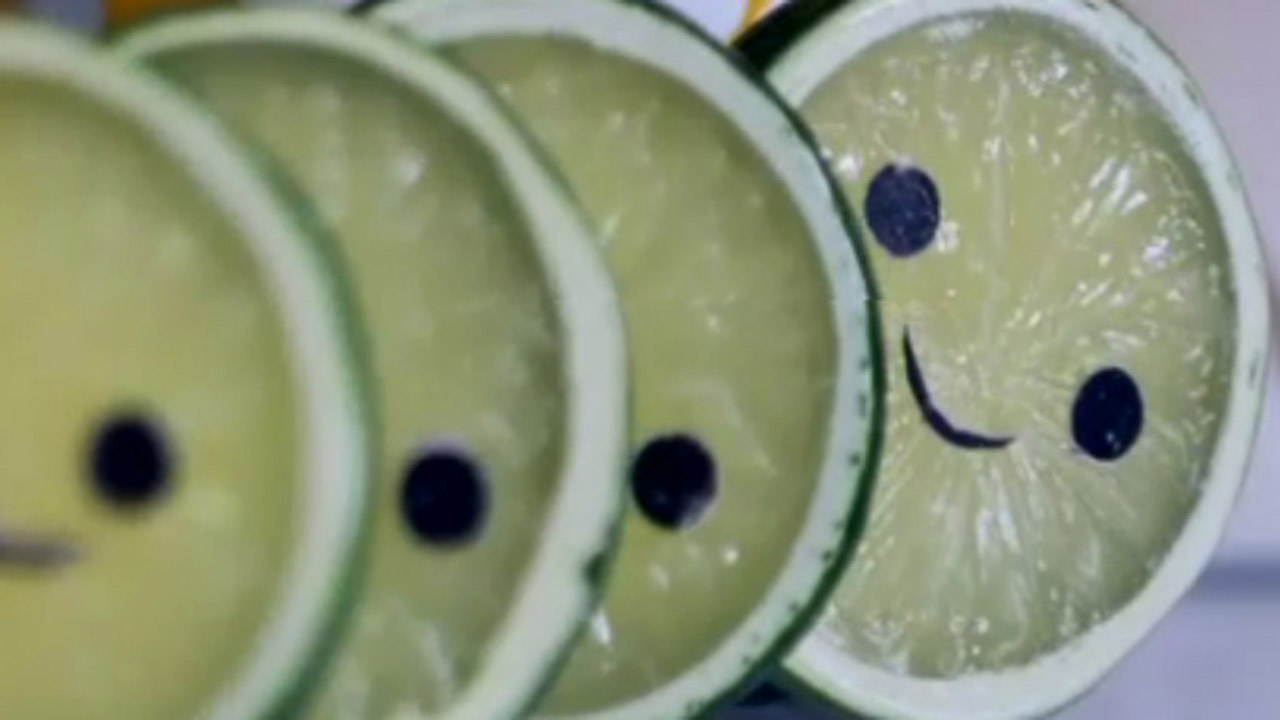 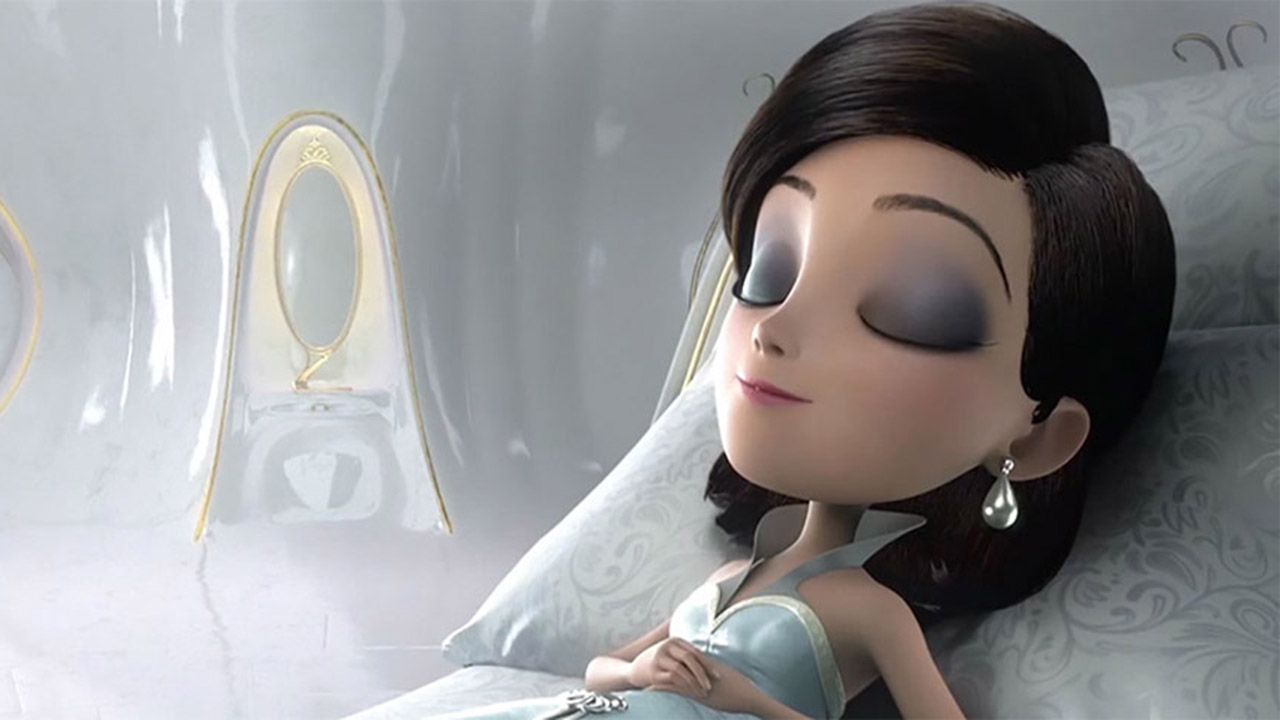