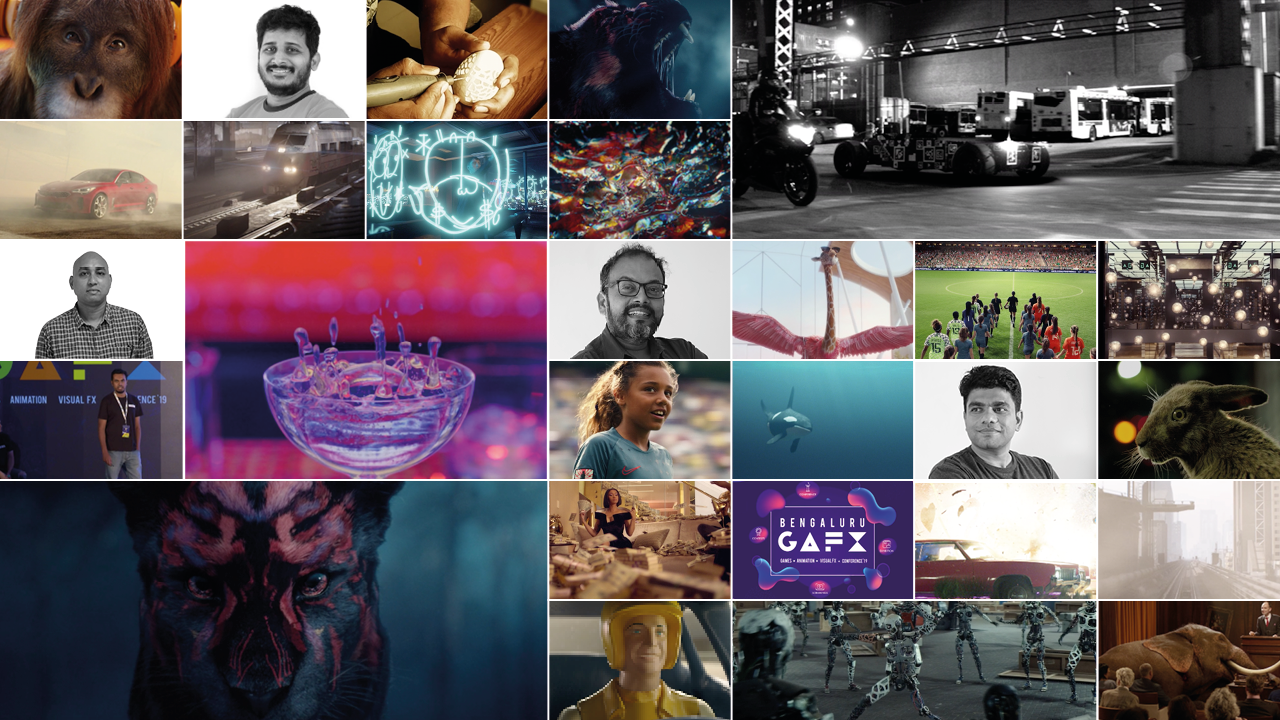 ‹ Back to List
July 29th, 2019
Share
Welcome to the first edition of our Mill Bangalore highlights series. Each quarter we will share insights, highlights, news, celebrations and behind the scenes activity taking place in our Bangalore studio. We kick off the inaugural edition in line with the launch of Mill Bangalore’s brand new reel showcasing all the latest work the team have been working on. Check it out by clicking above!

OFFF Barcelona 2019 - ARXIV, directed by Ilya Abulkhanov out of Mill+ Junior Assets Artist, Sudakshina Sridharan explains that: 'This project was one of the most gratifying jobs we have worked on. We were granted creative freedom which allowed us to express ourselves. The initial briefing required us to create an abandoned sci fi environment. The concept sparked our creativity and enthusiasm instantly.

Shared between a group of 5, OFFF was worked on for around one and a half months. Our main focus being, modeling, texturing and layout. We predominantly worked on the buildings and the shots in which they resided.
Our biggest challenge was to complete the task within a limited time frame. We worked with files that were heavy, involved texturing whilst simultaneously work on layout.

We took inspiration from everywhere around us, when walking the streets, even when going to grab a snack, we studied every building in the area. Looking for details such as wires, hanging debris and antennas. We then returned to the studio determined to achieve those details within our extensive amount of buildings.' Asit Midya: Junior Lighting Artist adds: 'I had seen Director, Ilya Abulkhanov’s previous work. So it was fairly easy to comprehend the films intent and aesthetic requirements. Our CG task was to show the post apocalyptic foggy city. We added broken glass and additional textures such as dirt, dust and rust to make it realistic. Besides the two interior scenes, all the scenes were shot in daylight mode. The challenge was creating a dull light that reflected the abandoned city, cinematic in its nature.

We had one shot with a continuous train within shot, the window was green screened and it was the compositors job to replace the screen with animated CG to give the effect of the train moving. Lastly we supplied the compositors with a lengthy frame range with over scan CG render, so they could easily use for multiple shots by offsetting the frame range.' Forward Festival - Odd One Out, directed by Raj Davsi out of Mill+ Madhur Pole, CG Supervisor discusses working on the job: 'With the director Rajinder Davsi at the helm, the main aspects of the job were completed in Mill Bangalore. The task was to depict a photo realistic panther in a stylised environment with an element of fantasy. We had a lot of creative freedom but it also meant we had a great deal of responsibility to push the quality of the work to the max.

One of the main tasks was for the psychedelic colour pattern to emerge on the body of our hero panther. We used our fertilizer developer to assist us. Our Fx supervisor created a workflow which allowed us to direct every portion of the pattern reveal, shot by shot.

We found it difficult to obtain video references for the panthers as they are very reclusive animals. Using the limited footage we found alongside existing tiger footage with the necessary tweaks. The idea was to create a believable panther with a heightened sense of drama.

The compositing team played with a colour palette which was almost monochromatic. The fog and the volumetrics needed to be seamlessly integrated in the scenes. Compositors used stock footage and their own 2D volumetrics for some shots to show interaction between the panther and its environment. Retouching was necessary on a shot by shot basis to enhance the eyes and fur color of the panther. As it was an abstract concept, it had to be approached artistically. Every person who had worked on this project had their own individual artistic contributions. Raj had a very clear creative vision and which helped. We added many external elements, stock footage and plugins when compositing to make the characters and elements blend more into the scene and thereby look beautiful.

I had a chance to work with Sole Martin for this project and she is a wonderful artist to interact and share ideas with.'

Amit Pail, Senior Lighting Lead Artist adds: 'When we got the mood board and the rough edit of ‘Odd One Out’ everyone wanted to get there hands on it. It was very creative and mysterious in terms of the visuals. It gave us the chance to create something that we hadn't seen before.

As the panther was black, lighting it in a dark environment was challenging, it had minimal diffuse value in it and only fur would catch the specular reflection. Keeping it true to a real panther but also making it look mysterious was certainly a challenge.' Discussing the Nike campaign Loganathan Perumal, Senior FX Artist states: 'In total we worked on 38 crowd shots and 5 social shots during this project. Bangalore also supported the LA team in creating the UK VS South Korea game Sequence, using our crowd cache and was responsible for the Holland and Nigeria crowds. Converting mocap data (FBX) to Golaem motion file, and Crowd simulation cache with flag props.

When building the Crowd Logic for the stadium crowds we needed to incorporate emotions such as cheering, aggression and disappointment by using custom parameters and per particle attributes from outside of crowd behaviour editor in the golaem plugin.

We populated the 53,686 crowds in the Stadium Maracana including football fans, common and security guards.' Venugopal Ananthaneni - Senior Lighting Artist adds 'We were all really excited at the chance to work on this key campaign for Nike. The brief instructed us to  create a full GG stadium and crowd which matches to the live-action plate.

In terms of lighting, we sourced references from the client which proved to be very helpful in order to achieve the end result. We tried to project stadium lights and a golden hour dusk. Around 36 shots 6 Artists 15 days and the effective collaboration of different departments, made this spot possible.'

Carlsberg  - The Lake, directed by Nicolai Fuglsig of MJZ London Gaurav Mathur, FX Supervisor discusses his departments role in the Carlsberg spot: 'Heavy winds were responsible for blowing away all on-set fog, it was our job to add this in post, to complete the overall look of the spot. The brief declared that the spot begins with a dense fog and concludes with a bright blue sky. We provided slow-moving CGI fog separated in the foreground, mid-ground and background layers as per the plates.

It was much easier to craft the density and mood with various degrees of fog at the time of finishing. We also crafted CGI birds to contribute towards the dark atmosphere.'

There is something fascinating about the shape of the egg, and the idea of making this into art. Many early civilizations regarded the egg as a fertility symbol and decorated it as part of their fertility rites. But the modern man still values egg art, possibly because it has become so ingrained in our nature.
I started carving in 2016. I stumbled on a YouTube video about eggshell carving that fascinated me. I was wondering how a fragile eggshell could be carved and made into such wonderful artwork. By acquiring some painting skills and pushing my intense curiosity, I was able to attempt the carving. Over time I began to love pushing the limits of the eggshell, seeing how much I could remove without destroying its integrity. The challenge of working with this most fragile form is thoroughly enjoyable and some pretty amazing creations can be made. Getting out of my daily routine and egg carving is like meditation!

Indraneel Guha is hired as the new Head of Studio Indraneel has been with Tata Elxsi for the past 15 years and brings with him a vast range of experience in post-production, design and VFX. The Mill is excited to have someone with his background in studio development, project management and collaboration with western offices. All of this has made him for a terrific fit for Mill Bangalore and we’re thrilled to have his leadership at a key moment in our studios growth.

Deepak Shrivastava is hired as the new Head of Production Deepak joins The Mill’s Bangalore team having previously worked at MPC Bangalore where he was in charge of Operations and Technology, establishing a pipeline and process for MPC advertising. In 2018 he took on the dual responsibility as Head of Operations for both The Mill and MPC’s Indian studios, within this role he also managed talent acquisition and artist L&D.

Gaurav Mathur is promoted to Deputy Head of 3D Gaurav Joined Mill Bangalore in April 2018, bringing with him more than 15 years of experience in TV commercials and feature films. Starting as a CG generalist in local advertising industry he moved on to seek high quality visual effects work at leading studios such as Rhythm and Hues, DreamWorks, Animal logic and DNEG.

In 2018, His work on Boss Baby received VES nomination under the Outstanding Effects Simulation Category for Animated Films. Following Anthony’s studies, he began his career in 3D and as a concept artist before moving into compositing, VFX and CGI supervision. His career spans over 20 years and has worked at Maya Digital Studios, Prana, CMM studios and Al Jazeera Sports. His passion to learn and experimental nature allowed him to also work on AR/VR experiential and gaming projects.

Bengaluru GAFX Conference is India’s most prominent and largest annual event for games, animation and visual effects industry hosted by Government of Karnataka and organised by ABAI.

Speakers from The Mill at this years conference included; Head of Studio Chris Harlowe, Head of 2D Rakesh Venugopalan and Head of 3D Dhiran Karkera's. June monthlies was dedicated to world environment day. As part of that we planted saplings in the tech park and educated the employees on planting more plants to save  planet earth. As part of international women’s day celebrations, we had a special CRS activity designed for adolescent girls educating them about the hygiene products and it’s usage. In this activity, we assembled 300 bags with 30 different hygiene products and distributed to girls at 3 different schools. Through role plays we tried to break the taboo of speaking about sanitation and its importance.

Every quarter The Mill Bangalore participates in corporate social responsibility. Under this school pairing was one of them

Teams of volunteers formed to create original and educational artwork centered around the topics of right to education, nutrition and sanitation.

Spending the day the volunteers brought color to the kids everyday life at school through painting walls and making hand printed t-shirts. This game is one of the favorites at The Mill Bangalore. Employees look forward to it year long, practice for months and participate in the 3 day league matches.