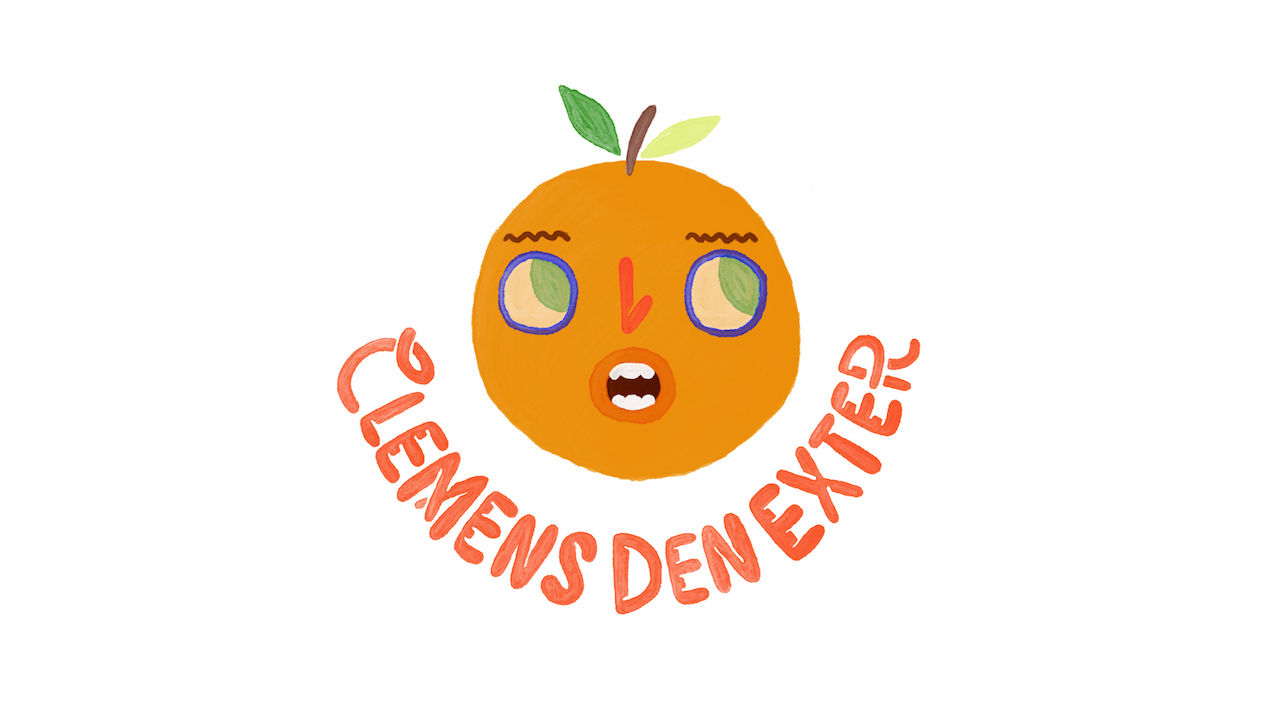 ‹ Back to List
August 6th, 2018
Share
The Mill is a creative culture made up of talented individuals from different backgrounds. They work tirelessly to perfect their craft and hone new techniques, whilst inspiring and collaborating with those around them.
The Mill Spotlight Series highlights artists, technologists, producers and everyone in between, delving into their passion projects.
This week we sat down with Designer Clemens den Exter to find out more about his recognizable design style and what he has next in the pipeline…
Tell me a bit about yourself and how you got into your field?
I studied Illustration at The Willem De Kooning Academie in Rotterdam. As I was approaching graduation I decided, sort of last minute, that I wanted to live in NYC for a bit. Most of my friends and college classmates had gone abroad to study for a semester or do an internship abroad - I never did and was starting to regret it. Before I moved I reached out to some companies and designers through email, making sure I had some people to talk to when I made the move, since my main professional goal was to learn how to be a better animator after college. One interview led to another and before I knew it I started designing and animating at The Mill. I haven't left NYC since. 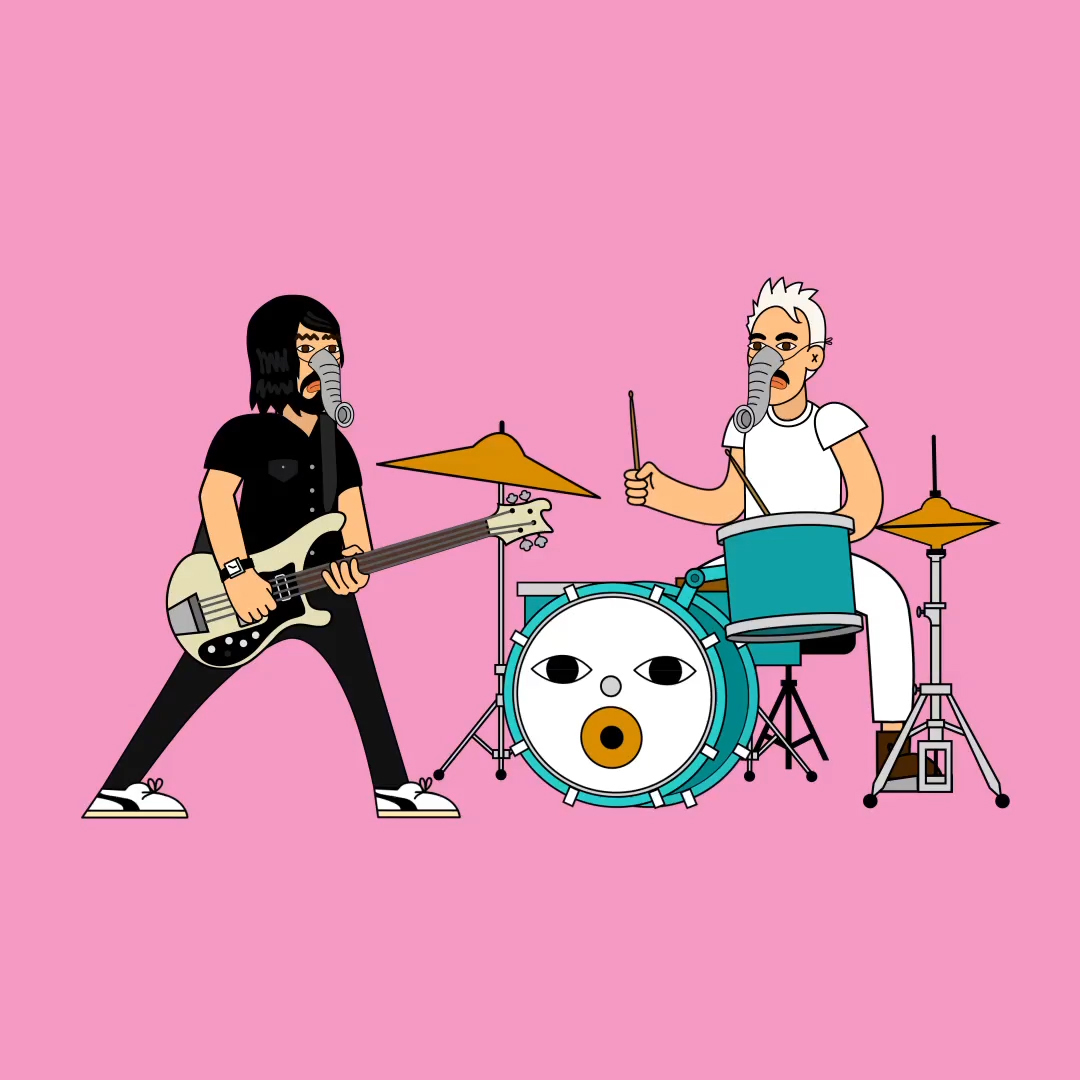 Who / what inspires you?
I just went on a trip to Japan and I was super inspired by how well designed and creative their signage was, especially their non-smoking signs. 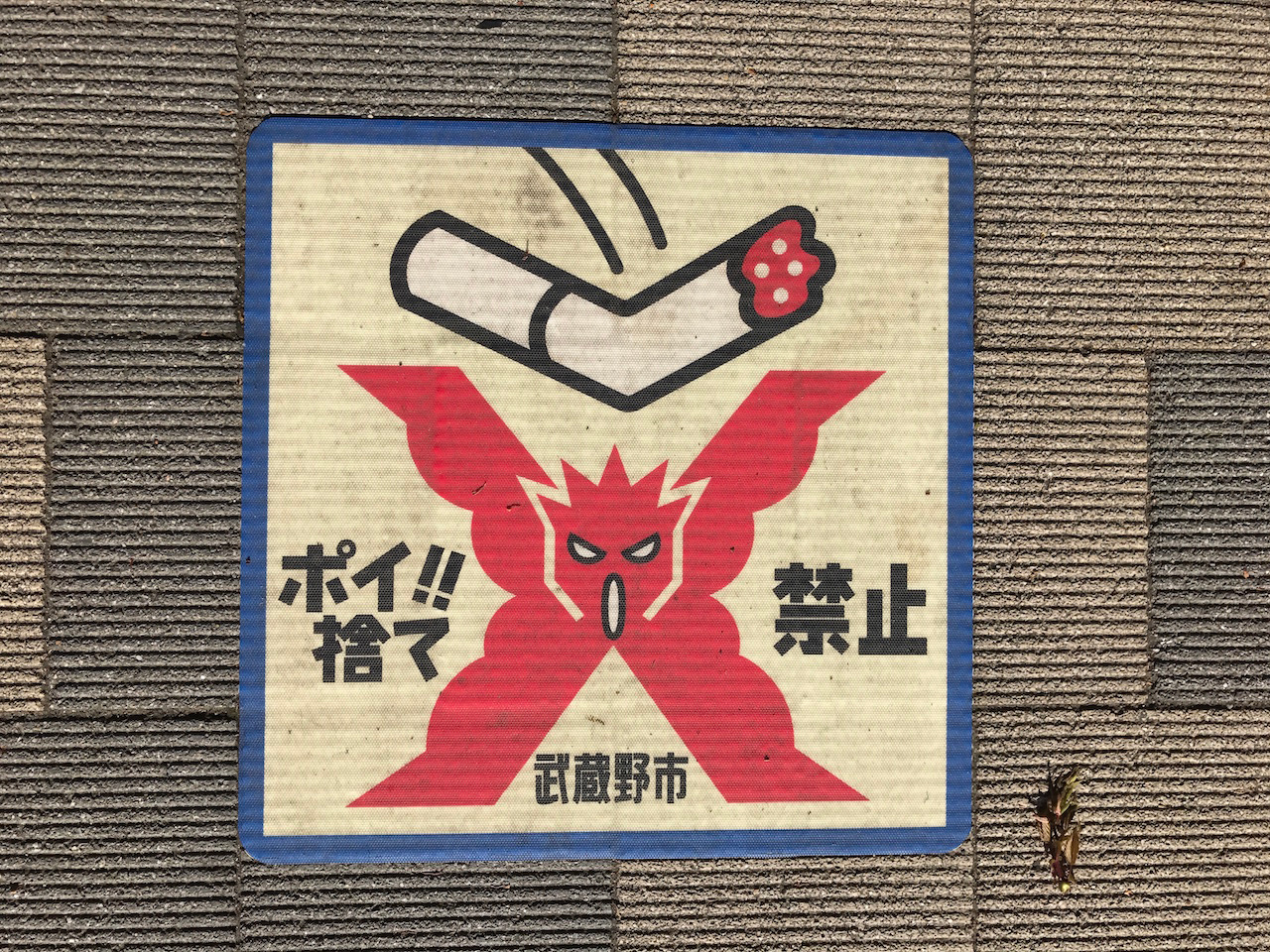 What are you currently watching / playing with / listening to?
I've recently become addicted to podcasts, especially one called "This Is Criminal". It's a podcast about criminals as harmless as a woman who makes pot brownies to full-blown serial killers. I've also been making a lot of music, seeing as I'm in the process of finishing an EP with my new band, this is the first time I've been in a band where we've done an entire record by ourselves, without the help of a producer or engineer. Its been a lot of fun, but it involves a lot of time listening to it over and over. I've had to sing the highest and yell and drum the loudest I've ever done, I can't wait to release it!
You're always working on something weird and wonderful, tell us about your latest creative project outside of The Mill?
I just finished 21 illustrations in the form of tiles. Each tile is based on a derogatory Dutch term. It turns out that since the 17th century the word Dutch has had a negative connotation in English, variously meaning cheap, dishonest, alcoholic, treacherous, selfish and just plain wrong. The derogatory usage of the word "Dutch" stems from an old beef between the English and Dutch from the 17th Century. I'm prepping to get them printed as a book/zine using an old risograph printer. It's the kind of printer that prints in two core colors, creating a third color as they overlap. 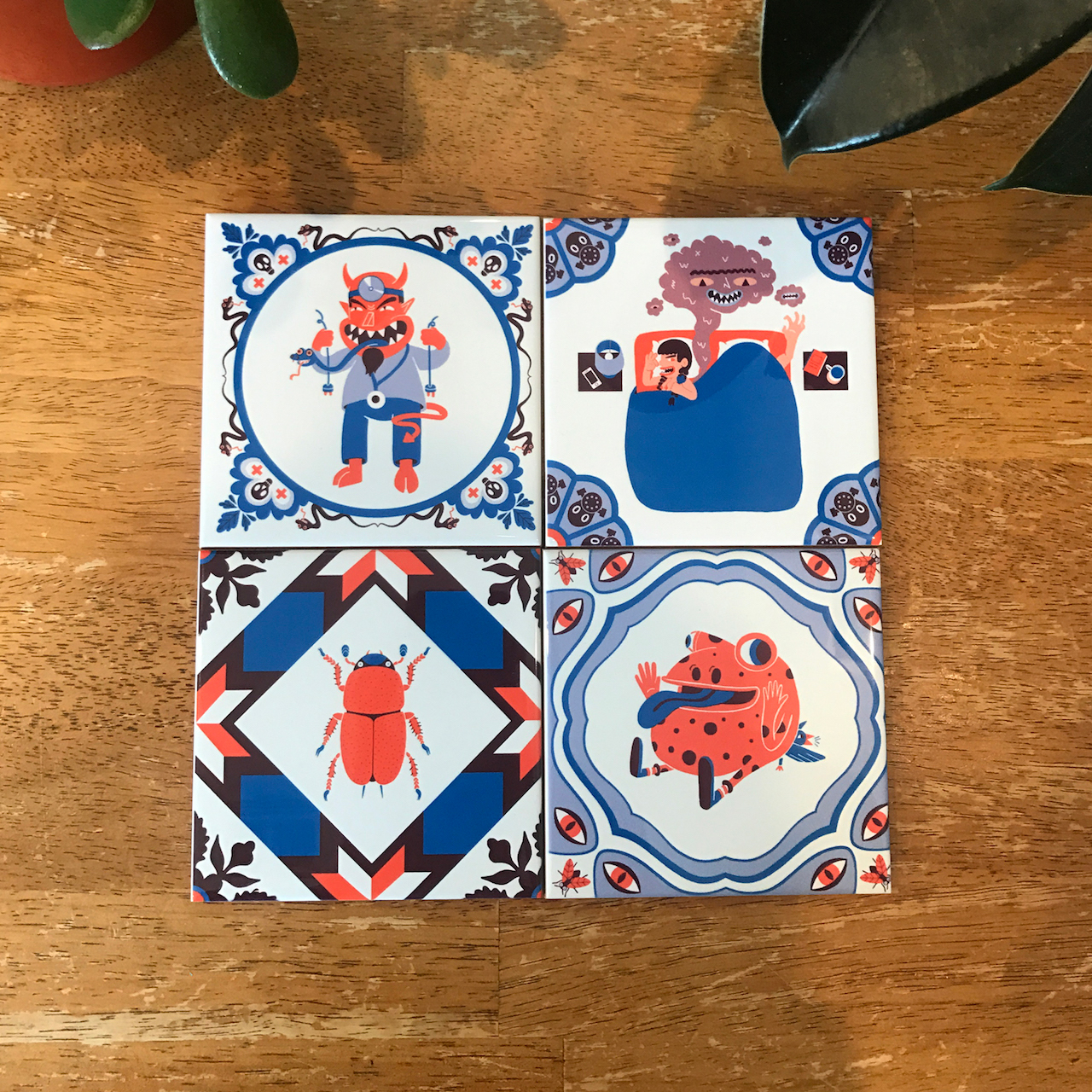 Tell us a bit about your design style, and your favorite mediums to work within.
I'd say my style is graphic, colorful and whimsical. But it does tend to get a little weird sometimes, my illustrations feature a lot of food with faces, boobs and unibrows. If I'm not designing or animating, I like making sculptures out of wood or ceramics, which is nice to have on the side, seeing as I work on the computer most of the time. 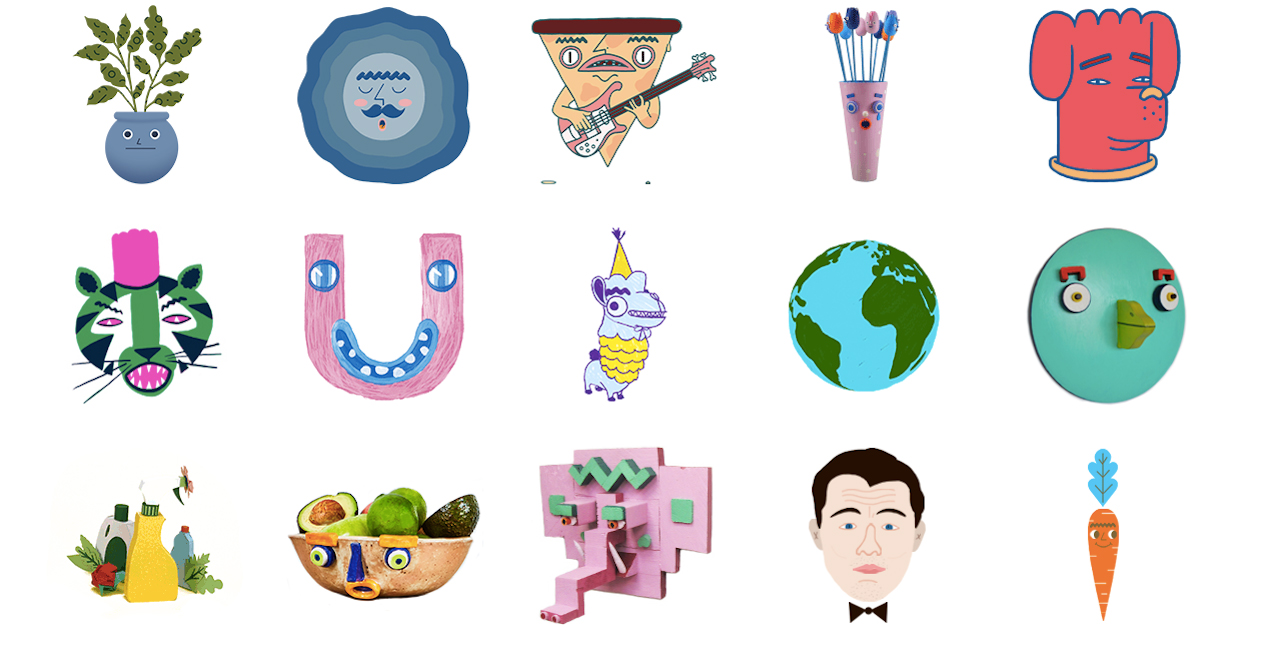 How did your designs become available on giphy? And what does that mean to you?
Someone on the internet uploaded my Clementine illustration to giphy without me knowing about it. A friend told me that she had seen it on instagram and told me it was trending. Within a few days Giphy reached out and gave me an artist account. It's really fun to see people interact and play around with my gif's. I recently saw my favorite band Death From Above 1979 use my pizza bass player gif it in their stories. The fun thing is that the pizza is playing a Rickenbacker bass which is an ode to their bassist. They loved it and we started to chat and now I'm going to make a gif for them. 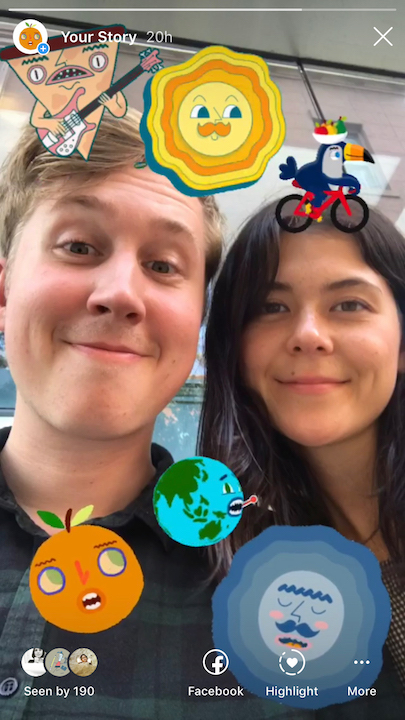 What's next on your agenda?
Wendy Eduarte (a fellow designer at The Mill) and I are starting a line of socks. Designing socks has been on my bucket list for a while now.
Check out more on Clem's projects, characters and designs here.
Save Playlist
My Mill Playlist (0)
Save Playlist
Clear
copy link
integer varius
Lorem ipsum dolor
Press Enter to Search